Start a Wiki
The world of Hyper Light Drifter contains five major areas that can be seen on the world map: the Central Zone, the Mountains (North Area), the Lake (East Area), the Crystal Forest (West Area) and the Barren Hills (South Area).

Each location contains many enemies and one boss, with the exception of Barren Hills, which includes three minibosses and one main boss.

In the beginning of the game you are free to explore the Mountains, the Lake, and the Crystal Forest. The Barren Hills is only unlocked after the other three areas are completed. You need to collect at least four out of the eight Modules in an area and kill its boss to complete it.

The most common order to explore the major areas is the Lake, then the Mountains, and then the Crystal Forest. This order is based on how difficult the area is, how difficult the boss is, and what abilities you have when completing each area.

The final area in the world, located underneath Central Town and only available when sixteen Modules have been collected, is the Abyss.

In Hyper Light Drifter, many items are hidden through the use of secret passages or doors.

You can determine the location of a secret by a distinct marking on the ground, similar to those seen on Monoliths, before one. Some secrets require you to press and hold the interact button to reveal invisible platforms in order to access them, some lead to a switch that can be activated with with the use of a gun.

Note: some switches may require a Rifle/Railgun to be activated. 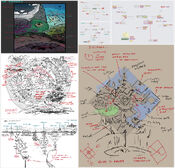 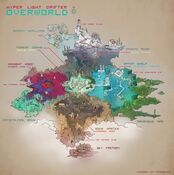 Retrieved from "https://hyperlightdrifter.fandom.com/wiki/World?oldid=9592"
Community content is available under CC-BY-SA unless otherwise noted.