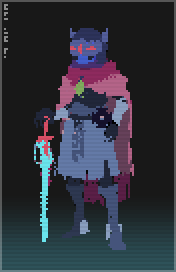 The Drifter, referred on his tarot card as "The Magician", is the main playable character in Hyper Light Drifter. He is a blue-skinned humanoid who has been infected with a strange terminal disease. The Drifter travels the World in search of a cure.

When asked, developer Alex Preston said that "he" is the appropriate pronoun for Drifter. Source The Drifter is one of many different drifters, meaning that it is possibly not his proper name but a descriptive title or nomadic type of occupation. According to the game's original description, "Drifters of this world are the collectors of forgotten knowledge, lost technologies and broken histories."

Not much is certain about the Drifter's history. It can be inferred that he was suffering from his infection prior to the start of the game, and can be further inferred that he came to the land in search for a cure for it. The opening cinematic seems to show him waking amidst a pile of corpses, possibly a result of the invasion mentioned elsewhere in game.

The Drifter arrives in the world on the search for a cure, following Anubis in hopes that they will lead him to an answer. On his way there, he fights through a small gauntlet of enemies, where he picks up a pistol and immediately puts it to use. As he exits the dungeon and approaches the Library, he falls into a coughing fit, and is confronted by an entity referred to as "Judgement", who strikes him down. At some point he is found and nursed back to health by the Guardian, and wakes up in their house, picking up a map and learning how to access Immortal Cell. From there, he fights his way through the 4 corners of the world, activating the 4 obelisks and opening up the ground beneath central town and revealing the path to Judgment. After an intense battle, the drifter finishes Judgment, and destroys the Immortal Cell. As the cavern collapses around him, Anubis deserts the drifter, leaving him to drift away in peace one final time.

The drifter is well versed in multiple combat abilities. He is more than capable with a sword, and with any form of energy-based firearm. It's unclear if the ability to turn destruction into projectiles is an aspect of the firearms, the sword, or the drifter himself. He also is in possession of a small drone, used to interact with the technology within the world. The drifter has the ability to drift, a titular dash-like burst which renders him invincible for a brief period and can be used for movement or to position around enemies. 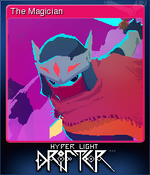 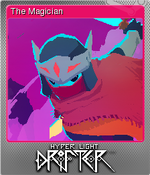 Add a photo to this gallery

Retrieved from "https://hyperlightdrifter.fandom.com/wiki/The_Drifter?oldid=10063"
Community content is available under CC-BY-SA unless otherwise noted.