Modules are the main collectible of Hyper Light Drifter.

32 Modules are scattered across the World, with 8 available in each quadrant. The player usually only needs 3 or 4 modules from a quadrant in order to progress to its boss and pillar. The remaining modules from each area serve to open the area's 8-module door, which contain Gearbits and other items.

Modules can be detected by their distinctive pulsing sound, which can also help locate them. The modules themselves appear to act as a sort of power source — on several occasions machinery can be heard powering down and the lights dim when a module is removed.

Every time the first four modules are collected in an area, a nightmare sequence plays: the Drifter coughs up blood, and Judgement manifests, brutally murdering the Drifter. As the Drifter collapses, disjointed images from the game's intro flicker by before ending abruptly, as the Drifter wakes up without a scratch.

Several modules are found surrounded by multiple corpses, all with sprays of blood suggesting they died violently. 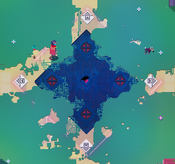 The entrance to the Abyss.

The Drifter activating a Module.

Module surrounded by dead explorers, found in the East

Module surrounded by dead cultists, found in the North.

Module surrounded by dead explorers, found in the West.
Русский
Community content is available under CC-BY-SA unless otherwise noted.
Advertisement