Keys are pieces of ancient technology that allow The Drifter to access areas locked behind doors.

If you have an insufficient amount of keys for a door, the remaining keys will show up red. They are only found on Shadow Corpses, which are behind secret passageways and challenges throughout the World. There are a total of 16 keys scattered around the world. 4 of the 16 keys can be found in each area; Mountains, Lake, Crystal Forest, and Barren Hills.

You are able to access all the keys with a Railgun/Impact Railgun and Pistol at any time in the game provided you have raised the appropriate tower and lowered the appropriate "road blocks." Some keys require the Multidash.

Keys are not consumed when opening doors that require them. 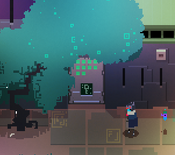 An image of the 10 keys door in the Mountains.
Русский
Community content is available under CC-BY-SA unless otherwise noted.
Advertisement