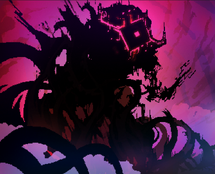 The Crystal, the Immortal Cell, Judgement or Hal[1] is a malevolent entity. It is the main antagonist of the Drifter and the final boss of Hyper Light Drifter, residing deep beneath the Central Town.

Judgement is seemingly a form of artificial intelligence but is also somehow related to the disease that affects several of the drifters in the world, with Judgement showing itself in frightening and violent visions to anyone inflicted with it, attacking the diseased. How it is connected to it is unknown. Whether Judgement is truly a physical being, only visions projected psychically or a blend of both is unknown. The "Immortal Cell" that Judgement was born out of was crafted by the four main species of the world long ago by harnessing the power of a "wellspring", in order to grant the people of the world immortality. However some people were against this idea and corrupted its purpose. Eventually a war which the Cell was somehow involved in broke out, ending in a cataclysmic event.

The Immortal Cell remained festering beaneath the earth until the Drifter found a way to it, fought Judgement and destroyed the Immortal Cell, ending its infliction on the world and with the four-sided diamond shape on its body, seemingly representing the shape of the Immortal Cell.

Judgement appears to only antagonize those with the disease, and to appear to each diseased in a different, unique form, although always black and pink. The guardian found him in a worm-like form.

This entity appears at multiple points throughout the game as a haunting reminder to The Drifter of its presence, apparently composed of living shadow. Its intimidating appearance, multiple times larger than the protagonist, is only the half of its looming, threatening nature.

Throughout the course of the game, Judgement is seen in disturbing visions as the disease plagues The Drifter, which worsen as time goes on. The infection projects Judgment, who kills the protagonist in various ways, only for them to wake without a scratch.

One of the best and easiest way to be able beat Judgement is have all the abilities unlocked. In doing this you are already half way to beating him.

Starting off with his first and most basic attack, Judgement will charge at you in one direction until he impacts a wall.

He does this as his opening attack after using Light Explosion. If you haven't brought him down to 50% or 25% HP after his Arm Stab attack, he will use his Charge again at the same level of speed and times based on how much damage he has taken.

The best way counter this attack, is to attack just before he does. He will walk slowly towards you, allowing you to deal some damage.

You can pull off 3 Phantom Strike or even a Heavy Strike to him with your sword, or use your weapon to hand relative to its speed on him. He will then take about 1 second in a frame to charge. You should dash away before that triggers, dashing horizontally. When he speeds up, charging twice or more, you'll have to Chain Dash out of the way.

Judgement will use this attack just after his Charge attack. Judgement will spew out a volley of bullets much like a machine gun. The bullets he fires will spread out across the screen as they reach the other side of the arena.

Similar to almost all his attacks, at 50% and 25% HP he will speed up and fire more bullets. The safest way to deal with them, is to use your dash, activating the Bullet Absorb to absorb the bullets. He will then fire his Hyper Laser, so be careful. You can deal some damage just before he moves to another corner of the room for another Bullet Barrage.

The more effective - and dangerous - way to counter this attack, is using your Bullet Deflect to deflect his bullets back at him. This deals more damage than any of the other attacks you could use. And be warned: as he hovers around the perimeter of the room, don't stand in front of him, as he will damage you. If you get hit by this part of the attack, more often than not you will get stun-locked and die. However, if you manage to reflect all of the projectiles as they spawn directly to him, you can immediately jump into Phase 2 from 1, or to Phase 3 from 2.

Launched right after every Bullet Barrage. Getting hit by this laser is almost fatal, meaning if you do get hit and manage to not die, you'll have to heal right away.

This attack can only be avoided by moving towards the the direction where the laser heads. At the end of the blast is a small safe spot, as he will not fire across the whole room. Be aware that he will increase the laser speed at 50% and 25% HP.

The best way to handle this is by paying attention to the first frames of his attack: for the first 2 frames, Judgement will crouch down and fire his laser in a straight line. This will then single which side Judgement will swipe to direction, allowing you to dash out of the way.

During this attack it's best not to attack him, but if you're fast enough to dodge away from the laser, you can use your gun.

While Judgement is firing the laser, it is possible to get behind him and attack him for the entire duration of the laser. He will not be able to hit you. Dash behind him during the crouching frames and he'll shoot his laser in front of him where you can hit him. In order to get behind him, it's recommended to stand where the laser will begin firing, then dash behind him as it starts. This is very difficult to time, however, and can often result in becoming stunlocked within the laser and dying.

Judgement will move to the center of the arena for this attack, after 4 or more times of using a mix of the Bullet Barrage and Hyper Laser. Once again, his attack will speed up as his health reaches 50% and 25%.

At the center point Judgement will shoot out multiple harpoon-like arms in different directions once, then a second time without retracting the previous ones. After the two waves of tentacles have extended, they will then retract back into Judgement for him to either repeat the attack or move on to a different one. Touching the harpoon-like arms in any way will damage you, even the sides, so make sure you try your best to watch his attack.

During this attack a small flash of where the tentacles will push out is shown in a frame. Watch this and move a few steps away from those, and you shouldn't get hit. This is also the second chance to pull off the most damage on Judgement, because as he retracts his tentacles you can pull off some easy Phantom Strike or even a Heavy Strike if you time it right. You can also use your gun while his spike arms are extended, just don't get too cocky.

This attack is the only attack that reacts differently to Judgement being on 50% and 25% HP. During any of Judgements attacks, if you bring Judgement down to 50%, and later 25% health, this attack will be triggered.

The best way to deal with these ♦ bombs, is to kill at least 2 of them and then keep your distance away from the other 2, possibly with a dash. Just don't forget that Judgement ground slam can still do the same amount of damage and knock you around. So as soon as his first frame appears hovering in the air, dash away from Judgement.

Be wary of how large the hit box area is on the ♦ bombs as it is much larger than you would think; do your best to keep them on the opposite side of the room. After that, prepare for the other Charge attack.

Now hopefully with this knowledge you might just be able to defeat Judgement. Your inevitable doom. 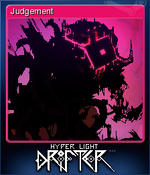 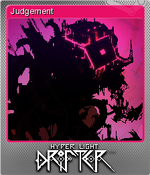 Taking the form of a monstrous centipede