Central Town
The Home is the small building that The Guardian brings The Drifter after the tutorial.

Here, the player acquires a map of the World and learns to collect the

Modules. The player also can change their Outfits here via three terminals, each one corresponding to a part of an armor set.

Examples of the mirror distorting the Drifter's reflection. 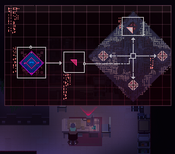 The diagram explaining what the Modules are used for.