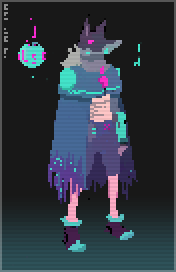 The Alternate Drifter is an alternate playable character that was made to be a backer-exclusive character for the first year after the game's release. As of 2017, she became available for all players, and is unlocked by completing the game as The Drifter at least once.

She is of humanoid build with a doglike head, much like the other animal people in the game.

She has 2 companion bots, one of which she uses for offense. Her main attack is a medium range projectile/beam, which deals AoE damage. She has 3 health (instead of 5, like The Drifter).

The co-op version of Alternate Drifter has blue eyes, and the lights on her gear are pink.

She howls in a wolflike manner upon dying in-game. (videoclip needed)

Once unlocked, she can be found in The Drifter's campaign, sitting in a chair and playing with her projectile beam in the Sword Master's Dojo.

Unlike in Drifter's campaign, the Alternate Drifter does not have a prologue cutscene at the start of the game, and will simply wake up in The Guardian's home. The Alternate Drifter does not appear to suffer the same sickness as the drifter, as she does not have a constant cough and is not haunted by visions of Judgement after gathering 4 modules in a new area. She does, however, still fight Judgement at the end of the game, and coughs blood in a brief pre-battle cutscene. The Judgement fight proceeds normally, although she uses a different finishing move, slicing Judgement in half instead.

The Alt Drifter also can see the Jackal in the 4 zones, the same way The Drifter can.

In the Special Edition (page needed) version of Hyper Light Drifter, Alternate Drifter can find The Drifter's skeleton outside the Tower (page needed), where the Boomerang Sword (page needed) can be found. (more citation is needed) 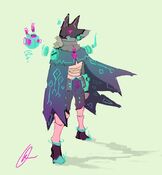 Concept art for the Alternate Drifter.

“This Drifter will have a different move set and primary weapon, as well as some shifts in the story and interactions with NPCs, plus the obvious entirely new set of animations for a main character. (Which is lot of work!)

You'll be able to choose which character to play as at the start of the campaign. This Drifter will be available to all players down the road; what you get here is an early playable unlock. I hope this satisfies.”

On June 22nd, 2017, the Alternate Drifter was made available to all owners of Hyper Light Drifter on Steam, and will be made available for all other platforms at a later date.